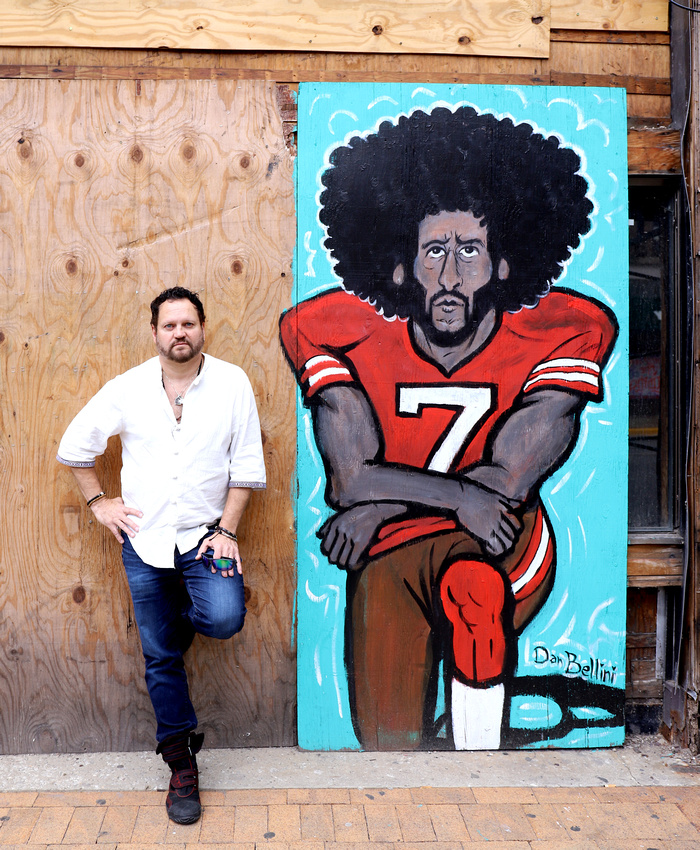 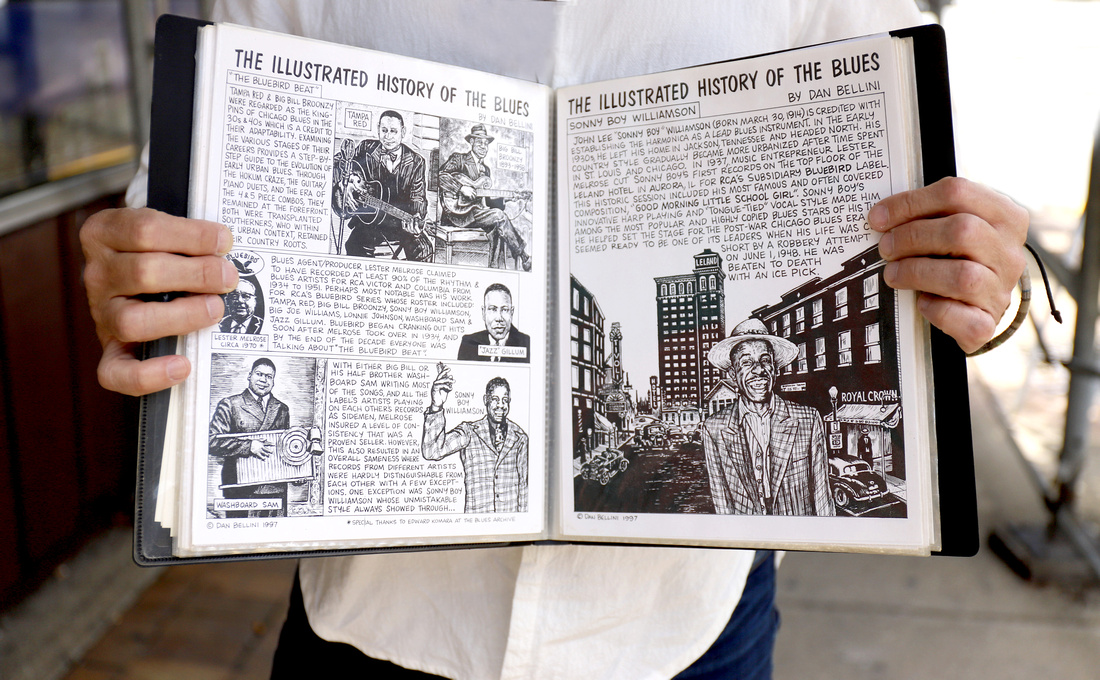 You may know Dan Bellini as a former member of Howard and the White Boys, the local Blues band that went on to tour with Buddy Guy and played with Chuck Barry, Bo Diddley, B.B. King and John Mayer.

Or you may know him as a Blues historian, illustrator, voodoo doll maker, or the artist behind the likeness of Colin Kaepernick on a boarded-up storefront on Broadway Street in Aurora, Illinois.

The guitar/harmonica player left Howard and the White Boys in 2004. “We started playing in college (Northern Illinois University), and for the next 16 years, that was our full-time job. None of us were music majors,” Bellini said. “The main key for making a living at music is not getting yourself into debt. It’s hard, but we did it well for 16 years.”

Bellini’s love of the Blues combined with his bachelor’s degree in Fine Arts made him the perfect candidate to paint murals of Blues greats inside Buddy Guy’s Legends Blues Club in Chicago. He painted the logo behind the stage, he said, and when the club moved, “they cut my paintings out of the drywall and brought them over to the new club.

“There were other Blues clubs where I did a ton of murals of just about every Blues guy,” Bellini said. “And Buddy Guy’s Legends had a monthly newsletter – a 40-page newsprint thing – and I did a one-page strip about the history of the Blues for every issue. I wrote and illustrated it, hand-lettering it in almost like a comic book style. I started with the African roots of the music and when I got up to the 1960s, I stopped. That was when the Blues audience changed from Black to White.

“Black people were leaving the Blues behind and getting into social activist music like Soul, along with Civil Rights music, and the Blues was almost a reminder of the past.”

Bellini says he can’t think of any other genre that lost its audience and gained a new audience “almost seamlessly.”

Blues records started catching the attention of college students in Europe and the States, Bellini said. “Blues guys started doing rock concerts for White audiences. So, that’s where I stopped with the history.

“It just happened organically, so I respect it,” he said of the audience switch. “If it didn’t happen, there probably wouldn’t have been a Civil Rights Movement, so it was good for the long run. The White audience kept the music alive, so the Blues performers still had jobs.”

Bellini said he intends to publish the history that he wrote from 1993 until into the mid-2000s. “I want to get it compiled and put it into book form.

“I took on all the racial issues (in the history) because they play a big role in how the music developed. The first page distinguishes between the various tribes and areas that played different types of instruments. One area focused on drums; another had stringed instruments. When (people of Africa were taken as slaves), drums were banned because they thought slaves were communicating with each other. Over the whole course of the music, race played such a big part in how it developed. That’s what gave people the blues in the first place.”

Called the “Illustrated History of the Blues,” Bellini would label the compilation as Part I, he said. “I don’t know if I would do a Part II, but it would give the book a frame of reference.”

These days, Bellini does a lot of freelance art. “Right now, I am working on a commission to do a voodoo doll of Donald Trump. I’ve done two of them before. Almost two winters ago, I broke my leg and couldn’t get out and do anything, and during that time a friend was complaining about an ex and for the fun of it I made a voodoo doll for her.

“I posted it on Facebook and got a couple of people asking me to make one for them. Obviously, I got a couple of Donald Trump requests. It paid my bills while I was laid up.

“I did a lot of research because I wanted to make them look as authentic as possible. They are pretty high quality. But I was surprised how much flak I got for being a part of people putting curses on one another. I look at them as pieces of art.”

Bellini learned how to sew in a home economics class at Elk Grove High School. “When my nephew was born, I made three or four Muppet-style puppets you would think were bought in a store.”

Bellini, who lives in Oswego, said he didn’t hear about the Sunday, May 31, 2020 protests that led to vandalism in downtown Aurora on the news or on social media.

“I was driving by and I saw a group of artists (decorating boarded-up storefronts) and I pulled over and asked, ‘Who do I talk to and how can I be involved in this?’”

He was directed to Jen Evans, Aurora’s director of public art, who picked out a spot for him.

“I did Colin Kaepernick and one other that has been taken down now. The Kaepernick one might stay up there for now because it’s on the old pawn shop. I think it was boarded up before the protests.”

Bellini says he had the idea for Kaepernick as soon as he began talking to Evans. “I told her I wanted to do a kneeling Colin Kaepernick, and everyone was on board with the idea. I did it the next day.

“Kaepernick is an image I hadn’t seen in any of the other art statements. I was really paying attention big time when he was (taking a knee) and then got blackballed in the NFL.

“Just like music, sports have a place in historical places and in society, too,” Bellini said.

“Because of Kaepernick, a lot of Black athletes for the first time had a platform they could use to speak out politically. And his protest was very peaceful. He just kneeled down, and everyone had a freaking fit over it.”

But, Bellini said, peaceful protests sometimes are ignored. “When protests get violent, people then say it should have been peaceful. But if people would have listened in the first place, maybe we wouldn’t have gotten to the point where buildings were burning.

“(Painting on the storefronts) was really an awesome thing to do after (the protests) happened: to make them beautiful instead of a bunch of boarded-up buildings. It was really inspirational.”

Bellini said each artist’s ideas were positive. “Someone did a great job on a George Floyd portrait. There were quotes, flowers, sunsets. On the whole, it turned out great. And it introduced me to the art community in Aurora and a met a ton of people.”