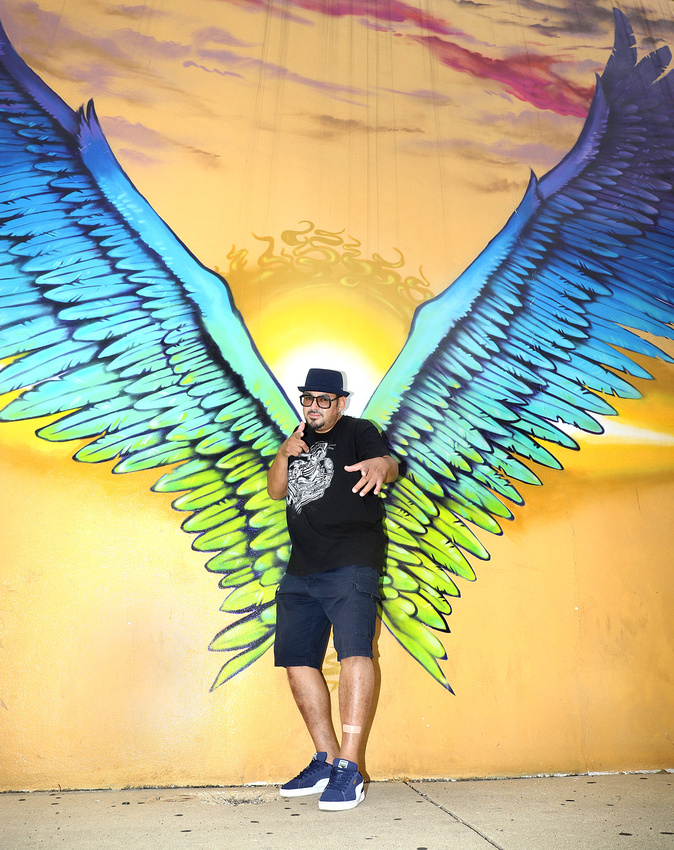 Sam Cervantes: From serving time to serving the community through art

Risin' up, back on the street
Did my time, took my chances
Went the distance, now I'm back on my feet
Just a man and his will to survive

--Eye of the Tiger by Jim Peterik

Sam Cervantes poses under the mural #HopeWingsAurora he painted on the side of LaFrance Bakery in downtown Aurora with the attitude of a tagger and the heart of an artist.

Today, Cervantes is a local celebrity. But it wasn’t always so.

City of Aurora officials honored Cervantes with a ribbon cutting and dedication of the mural at 118 E. Galena Blvd. on Oct. 9, 2018. He also was honored during that evening’s city council meeting, where Mayor Richard Irvin presented him with a proclamation proclaiming February 13, Cervantes’ birthday, as Sam Cervantes Day in Aurora.

Earlier this month, Jim Peterik, formerly of the bands The Ides of March and Survivor, shot a music video in downtown Aurora for his band Pride of Lions, using the wings as a backdrop. Cervantes met the rock legend who penned the words to “Eye of the Tiger,” and posed with him for a photo under the wings.

“It won’t be the first time my work has been featured in videos and magazines,” Cervantes said. “But to have a mega star like this guy appreciating my work is flattering to say the least.

“‘Eye of the Tiger’ is a huge hit and as someone who has deejayed for a number of years, I play it often.’”

Back in the day, when Cervantes was a 21-year-old working at Hollywood Casino, he was arrested for tagging a semi-trailer under Farnsworth Avenue on Aurora’s East side. He was sent to jail, which surprised him, because it was his first offense.

He was charged with criminal damage to property, a class 4 felony, for not only his own tagging but for the graffiti that already was there, on 15 semi-trailers. Cervantes served about two months in jail. “They kept me in a holding cell with murderers and rapists,” he remembers.

After three weeks, he was let out on furlough. He was to go out only to work, look for a job, or go to school. A jobless student, he took on a commission to paint a mural around a junkyard on Hill Avenue. Aurora Township’s Judy Maves, a community services specialist, told Cervantes and his friend to paint over their work.

“I said, ‘No, sorry,’” Cervantes remembers. “We called the owners and they told her they commissioned it, but she still called the Kane County Sherriff’s Office and I ended up back in jail. “She told the judge I was out doing graffiti, which violated the furlough.”

The father of four and grandfather of two now drives a paratransit bus for Aurora Township, ferrying people to and from doctor appointments and dialysis treatments.

But art is his first love. After the death of George Floyd ignited protests and looting in Aurora, Cervantes was asked to paint positive messages over two boarded-up businesses on Broadway. He painted the phrases “Aurora Stronger” and “Erase Racism” alongside other community artists and was then asked by Director of Public Art Jen Evans to adorn more boarded-up windows.

“When it was all done, I was driving down Broadway and saw all the art and positivity, and I was giddy,” he said.

The battle for positivity in the city has been ongoing ever since Cervantes was a little boy growing up on Aurora’s East side.

In 1991, he painted the mural “Think About It” on the side of a building at Union and Claim streets. It was supposed to be a positive message in a neighborhood that was a hotspot for rival gangs, Cervantes said.

“It depicted a boy holding a gun butt out – handing it to you,” he explains. The grim reaper is in the background with outstretched arms, and the word THINK is front and center. “It was all about a call to gang members to ‘think about it’ before they take the gun.”

That mural has been gone for quite some time. It was misunderstood, Cervantes said. “People didn’t understand my art.”

Also gone is the likeness of Pancho Villa that Cervantes painted on Pancho’s Restaurant on New York Street near Union Street as a commission for the owner. After the city council passed an ordinance on mural size that deemed it too large, it was painted over.

And Cervantes still doesn’t know why portraits he painted of slain Aurora Central Catholic School athlete Moshe Rogers and ACC graduate Armando Mendez have been erased from the wall of the former ACC gymnasium. “They were never supposed to be touched,” he says. The young men died in 1995 and 1994, respectively, from gang gunfire. Rogers was shot when a passenger in his car was mistaken for a gang member and Mendez was killed by a gang member who mistook him for a rival gang member.

Even though much of Cervantes’ work has been misunderstood or erased from their urban canvases over time, he is not dismayed.

In the future he would like to paint more “cultural murals,” like the one he had in mind for the side of LaFrance Bakery. “It was going to be a Mexican woman in full Indian headdress with an elaborate, indigenous costume,” he said. “I didn’t propose it because I thought I should come up with something more appealing to everybody. The city wanted to bring art and culture to the downtown. I knew there were wings like this all over the country, but I wanted to put my spin on it. I did my style with my colors. It’s a good tourist attraction.”