No matter when you drive by the Sue Skelley Tennis Courts on Smith St in Aurora, IL. You are  likely catch coach Jon Stott doing what he loves most. The weather is nothing more than a minor distraction. Pushing water with a broom or moving snow with a shovel. The tennis must go on.

Stott is a 2000 graduate from Aurora Christian School and he was ranked 6th in the country in doubles and 66th in singles during his high school career. At Christian he was a one man tennis team and he won sectionals three years in a row and was ranked number one during his junior year at ACS. 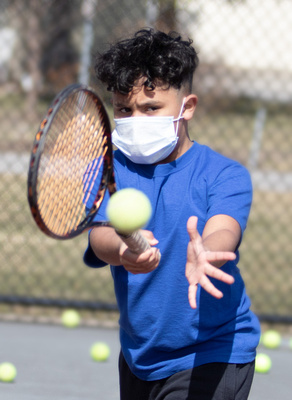 He received a tennis scholarship to New Mexico before transferring to Arizona State where he played tennis for the Sun Devils and graduated in 2004 with a degree in communications.

Jon played his first professional tennis match during his freshman year in college. He went on to play professionally both during and after college before returning home and dedicating his life to mentoring and coaching young people. When asked why does he do what he does. “To develop leadership skills and self confidence through tennis….Secondly, to help students reach their potential in tennis where they can play not only for their high schools or colleges, but for a lifetime.” I want to honor past coaches that came before me, teach what they taught me and make something good even better. To try to expand on what they did.”

Jon has his own business, JSTOTT LLC. He has been running the City of Lights Tennis Academy for the past 12 years. He started the Phillips Park summer tennis with his brother Matt back in 1998. They had about 30 kids and worked from 9-noon and 1-4pm. Each participant got a free lunch and played tennis 7 days per week fora fee of $10.00.

He has groomed some wonderful success stories along the way. The Harlow sisters; Sajela, Jaiere and Kaija. All three were standout tennis players at Oswego East H.S. Sajela went on to play tennis and graduate from Howard University. She is currently a kindergarten teacher is the Washington D.C. area. Jaiere played at Tuskegee University and is currently in grad school there. Kaija is a freshman at Towson University.

Mandela Shepherd played his high school tennis at Waubonsie Valley, then went on to play for Western Illinois University.

Jon is currently coaching Tony Martinez. Tony’s mother Jalitza “Jolly” Martinez was coached by Jon. Jalitza went to East Aurora H.S. before attending Aurora University where she was the number one singles player at both the high school and college level. She is currently a mom of two and principal at Allen Elementary School in D131 East Aurora.

“So I started the tennis camp as a child. My father always wanted me to play tennis and as a kid I thought it was so boring to watch. My mom enrolled (forced me lol) me in the tennis camp the summer before my freshman year in high school. At that point I had my mind set on volleyball, I was good at volleyball, I loved the sport and didn't think anything, especially tennis, could convince me otherwise. I was wrong, I ended up falling in love with tennis through that camp. And volleyball and tennis were in the same season, and it was a done deal, I was playing tennis for EA. I came back to the camp every summer until I aged out. When I aged out I began coaching the camp under Jon. It taught me discipline, strategy, hard work, and it gave me something to focus on. It was an absolute outlet for me. Tennis is very special to me and it was a place where i could tune out all the noise and for that hour or two i would be engaged, didn't worry about a thing, i just played. When I was a student in Jon's camp I would not only stay for the morning session, I would stay for the afternoon session as well. Tennis was my father's favorite sport and my father was incarcerated most of my life and I always longed for that relationship and I truly believe it was a way that I could connect with him despite the distance. Jon trained me before I went to college and again he was tough on me, but I learned discipline, I learned that the work needed to happen off the court as well. He conditioned me at Oakhurst and pushed me even when I wanted to give up, he was like "let's go!". His expectations are always high for his students and it's not just coaching it is mentoring. He truly and genuinely cares that he is not just producing amazing athletes, he wants to produce killer athletes that are good people with great character. Now being able to watch my son engage and take on the sport with the same coach I had as an adolescent and all through high school and college is pretty amazing. Whether he goes on to play at a collegiate level or whether he plays socially in the future, I know that he's gained critical thinking skills, communication skills, problem solving skills, a higher level of vocabulary, dedication, and a healthy competitive spirit. Since he was five when he started tennis, Jon never reduced his level of vocabulary with him. He always talked to him like he did his older players and that showed me that he believed in not only his athletic ability but his cognitive ability. The skills I learned help me in my current role as Principal. I am a team player, I am competitive, I am relentless about my belief in the potential of my students. I challenge them to be their best. I keep the expectations high and always remember we are building the whole child. “

“Artist is a descriptive term applied to a person who engages in an activity deemed to be an art. An artist also may be defined unofficially as "a person who expresses him- or herself through a medium". Jon Stott is an artist. His medium is tennis. The court is his canvass. If you have a child or you yourself are looking for a solid coach or trainer(630 608 9540) in the game of tennis. One who is more concerned with technique than talent. One who is more concerned with fundamentals over tournaments. But more importantly. One who cares about people.“Love the game and the game will love you back.